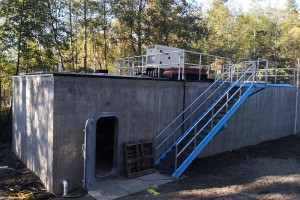 The plant was built on a geologically challenging site, and due to the proximity of the ocean and residential homes, the design incorporated features mitigating the effects of potential flooding, environmental impact, along with good neighbour guidelines set out by the SCRD.

With SCRD assuming the operations, the plant was started up in late 2018 Three consecutive monthly samples indicate that the plant is operating within the design limits. 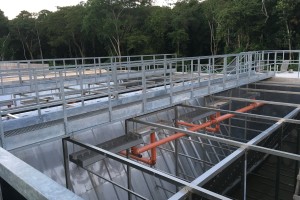 In 2017 ECOfluid was awarded a contract by a large Caribbean housing developer West Indies Home Contractors Ltd (WIHCON) to design, supply and install a wastewater treatment plant for their ‘Friendship’ housing development near Montego Bay, Jamaica. As with previous plants by ECOfluid in Jamaica, upflow sludge blanket filtration (USBF) technology followed by disinfection by chlorination was employed.

To mitigate capital cost outlay, the plant was designed to be built in phases with incremental modules added as dictated by the development build-up. The first phase, including one USBF bioreactor designed to process 690 m3/d of wastewater to National Environmental and Planning Agency (NEPA) standard, was completed and started up in late 2018. Apart from the design, ECOfluid scope of work included all mechanical, electrical and controls components supply and installation. A significant novelty feature of the design is an all-stainless steel USBF clarifier ensuring a long effective life cycle of the system. 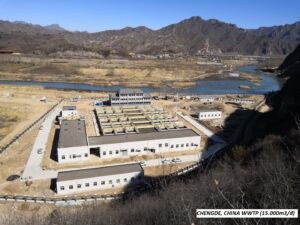 Completed and started up in 2018 was at 15,000 m3/d treatment capacity, to date the largest upflow sludge blanket filtration (USBF) technology based plant in Chengde, city situated northeast of Beijing, and the site of Mountain Resort, a vast imperial garden and palace, formerly used by the Qing emperors as summer residence.

ECOfluid’s scope of work included design and engineering of the biological treatment component of the plant. This plant is also the first to incorporate an all-concrete design and construction of the USBF clarifier, which reduced the cost of construction and ensures a long life expectancy of the system. 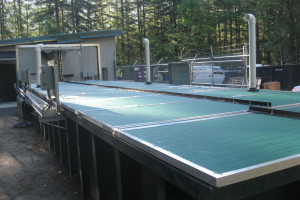 In 2017 ECOfluid was awarded a contract for the supply of a membrane bioreactor (MBR) package wastewater treatment plant for the Pinecrest community in the Squamish-Lillooet Regional District (SLRD) as an upgrade to their existing extended aeration plant.

Working together with TRUE Consulting and general contractor Acres Enterprises Ltd, the plant was completed and started up in the summer of 2018. All initial testing showed the plant was meeting the stringent effluent discharge limits as required by the SLRD almost immediately. 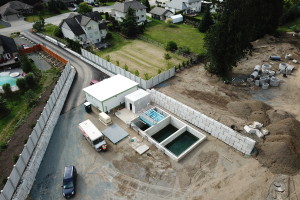 In early 2016, ECOfluid was awarded a contract to design and supply a membrane bioreactor (MBR) package wastewater treatment plant to a small development near Chilliwack, BC. As construction began, the development negotiated a deal to combine with an adjacent development and ECOfluid went back to the drawing board and proposed a larger plant, either MBR or upflow sludge blanket filtration (USBF), that could be built in phases. The USBF option was favoured by the Fraser Valley Regional District (FVRD), to whom ownership and operation of the plant would be transferred upon completion.

The plant was completed and commissioned in the fall of 2018, and ECOfluid is awaiting go-ahead to start the plant. This is anticipated in the spring of 2019. 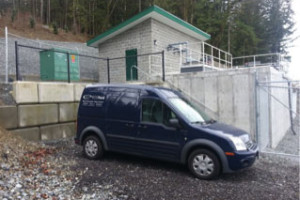 Second and final phase of this advanced wastewater treatment plant, more than doubling its original 2013 capacity, was completed and started up in 2018. The USBF technology based plant is serving a development of 110 residential units. Since the effluent is discharged in the vicinity of an aquifer, Class A reclaimed water quality effluent was stipulated as follows: BOD and TSS of less than 10 mg/L, Total Nitrogen of less than 20 mg/L, average Turbidity of 2 NTU, and Median Fecal Coliform of 200 MPN/100 mL. The project was awarded to ECOfluid as a Design-Build contract, and the plant is currently operated and maintained by ECOfluid.